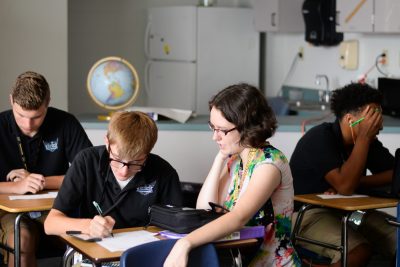 While in office, former Indianapolis Mayor Greg Ballard provided an annual videotaped message for the Irvington Preparatory Academy (IPA) commencement. He would always encourage the graduates to venture out into the world then return to Irvington to play a key role as community builders. Remarkably, six of IPA’s graduates have taken that message to heart – they are now employed by Irvington Community Schools, as follows:

Until recently, Smith never envisioned himself working in public education. While exploring the field of meteorology last year, he served as a substitute teacher at IPA. Then a full-time position for Title I math coach opened up; he applied and was hired. “I feel blessed to be working for the high school that taught and encouraged me,” he says.

The impact of IPA teachers on these homegrown staff members is a recurring theme. Sabra Tolliver, who teaches math at IPA, relied on the coaching of IPA English teacher Peggy Larkin during her first few years teaching in two other local schools. Pierle notes that when she considered becoming an educator, she recalled how welcoming her high school teachers were. “Honestly, I would not be where I am today without the help of my former teachers at IPA.” Now in her first year teaching 5th grade at ICES, she adds, “It already feels like family to me.”

Walden, who teaches kindergarten at ICES, also speaks fondly of her IPA teachers. “Mrs. Larkin and Mr. Uhlman really showed me what kind of teacher I wanted to be. They always made everything they taught relatable and meaningful.”

IPA Principal Jana Goebel believes that employing IPA alumni is a great advantage. “We are able to hire staff who already embody the values of The Irvington Way (Be Respectful, Responsible, Safe, Involved, and Focused) and understand our school culture,” she explains. “They are deeply committed to the success of their alma mater, which makes them ideal champions for our students.”

As Mayor Ballard shared, life really is about contributing positively to your community – wherever you may land. Catt echoes that sentiment: “Irvington Community Schools isn’t just a name, it’s who we are. Working here, I feel valued and have a sense of belonging. I have the privilege of doing important work that is changing lives.”