Jim Leisure, the new Irvington Community Schools Athletic Director, is no stranger to ICS. Leisure has been involved with ICS since 2008 as the Indianapolis Metropolitan Police Department (IMPD) G.R.E.A.T. program (Gang Resistance Education and Training) trainer for both Irvington Community Elementary School and Irvington Community Middle School. Leisure, a detective for 30 years (as well as serving three years as a patrolman), recently retired from IMPD. 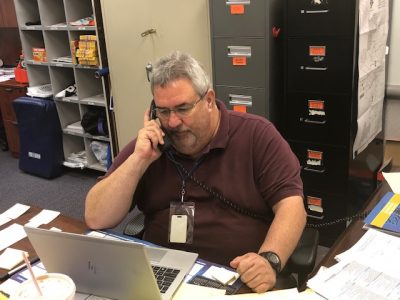 During his years at ICS in his IMPD capacity, he became familiar with and a fan of The Irvington Way, the ICS mission statement, and our emphasis on whole child development. “I really liked what I was seeing,” he says of the schools. Having taught the G.R.E.A.T. program in many local public charter and traditional public schools, he says, “Simply put, Irvington was just better at what they were producing than the other schools.”

“Coach Leisure,” as he prefers to be called, brings a significant background in high school athletic coaching to ICS. He has 27 years experience as a high school football coach, having served at Bishop Chatard High School (while there, Chatard won two state Class 3A championships, in 1997 and 1998), as well as with New Palestine High School, Noblesville High School, Lawrence North High School, Beech Grove High School, and Mt. Vernon High School. He also coached baseball for 10 years at the middle and high school levels.

Owing to his police work, Coach Leisure comes equipped with strong organizational and interpersonal communication skills, as well as having sharp attention to detail honed by his years as a detective. Naturally, he has a great appreciation for abiding by the rules. “We will strive to ensure that we are always following all IHSAA rules and bylaws,” he emphasizes.

Aligned from the get-go with the ICS approach to athletics, he strongly believes that developing people comes before developing players. “Ultimately, I would like to bring the athletic program to a point where we as coaches supplement the efforts of parents, grandparents, and guardians in teaching valuable life lessons to our young people.”

According to Coach Leisure, research indicates that less than five percent of high school athletes play college sports. Therefore, the physical skills learned in athletics have an early expiration date. However, he notes, “the life lessons student-athletes learn will be used for the rest of their lives.” There are many positives that come from participation in athletics, regardless of grade level, such as becoming a good listener, learning to follow directions, and working as a team member to accomplish goals. He says, “Those are some of the many aspects of athletics that also translate into being a good student.”

The new ICS AD recognizes that the role of parents in supporting their student-athletes is critical to their children’s development. He says, “If done correctly, parents can enjoy their student-athletes’ careers almost as much as the students.” Moreover, “parental support should be absolutely unconditional, meaning, they should want to help the program in some way, such as providing pre-game meals or decorating lockers before a big game.” He adds that parents should support all of the student-athletes, not just their own.

Of course, Coach Leisure will be at many athletic contests, especially that of Irvington Prep. So be sure to welcome him as a key member of “Ravens Nation.” And don’t hesitate to offer to lend a hand – that’s The Irvington Way!