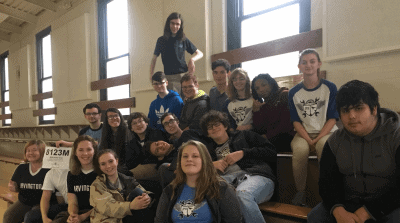 High school robotics clubs are popular; but one thing they are not is cheap. Registering robots for competition runs $150 per unit. Competition tournament fees are $75-$85 per robot. The field elements kit — which is the manipulative for the robots; stackable cones this season — cost $600 annually, and the elements change each year. Transporting the club members to competitions throughout the city, state, and region can run upwards of $500 per event, depending on location. And of course, teenagers are fond of eating, meaning that food expenses at competitions and during after-school club work sessions — well, you get the picture.

Says IPA Robotics Club sponsor Chris Ashmore (who also happens to be Irvington Community Schools Director of Information Technology), “This past season we were fortunate enough to not have to turn any student away because of our continued fundraising efforts. But next school year, that may not be possible without greater donor support.”

Ashmore explains that the robotic equipment they are currently using has significantly depreciated, as the motors, joysticks, and cortexes (i.e., brains) of the VEX robots are four years old. The new VEX v5 equipment the club is seeking for the 2018-2019 school year is already building excitement, but it poses a challenge to the club in affordability. So far, the club’s ability to scrape up enough change to cover expenses has kept them going — but barely. Ashmore notes, “Currently, our goal is to maintain the three robot teams we have in place, with hopes of adding a fourth team — the student interest is there. IPA wants to continue fostering youth engagement in STEAM-focused opportunities” (i.e., Science, Technology, Engineering, Art, and Math). Of the 23 Ravens who participated in the Robotics Club this school year, just three are seniors. Therein lies the challenge: to serve the growing student interest in robotics while meeting the program’s funding needs.

High school student robotics involvement cultivates interest in STEAM-based careers, which are in high demand globally, and will be for years to come. Robotics club experience promotes student enthusiasm for these subject areas — making them real and relevant — and can lead to a fulfilling career in many exciting related fields. If you would like to help stoke that interest for IPA students, please contact Chris Ashmore at (317) 357-3770 x107 or Heather Harmeyer at (317) 357-3770 x122. They will gladly fill you in!