The ICMS Drama Club may seem like a superfluous group considering so many kids that age are already experts in being dramatic – if not melodramatic. However, the middle school’s band of performers serves a valuable purpose both for those who participate and for the greater school community. For the members, the club provides a place to be themselves and simultaneously be someone else. It’s an opportunity to create something that matters greatly to them outside of schoolwork. For everyone else, it’s fun to see how creative the club can be. 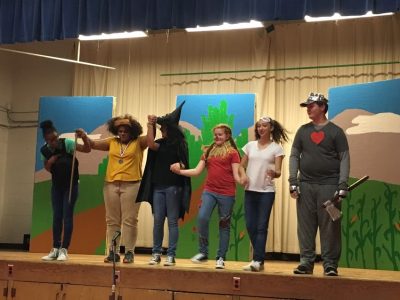 ICMS Student Services Representative Lyndsey Mundell rekindled the club during the 2015-2016 school year. She explains, “I searched for a way to connect with students outside of the classroom. Having very little idea of what to expect, I naively planned to gather and play casual improvisational games. Although I thought I was in charge, the kids were really steering the ship. They requested that we put on a play, and I agreed despite my minimal experience.” The inaugural play performed by the Drama Club was “The Bottom of the Lake.” 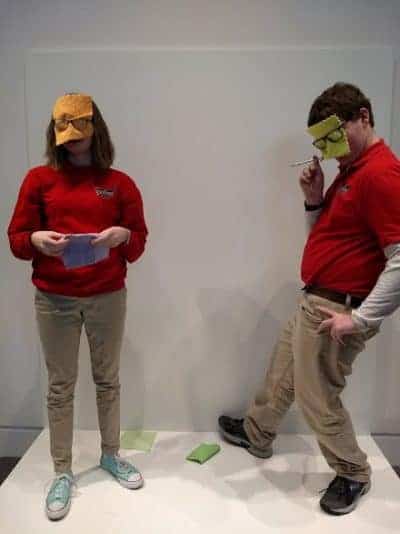 As Mrs. Mundell recalls, the first year was a learning experience. Tryouts were not held. Students simply joined with few expectations. “Lesson learned,” says the Drama Club sponsor.
“Now there is a process to ensure that any student who joins is committed to memorizing lines, showing up to practices, and putting in the required effort.” 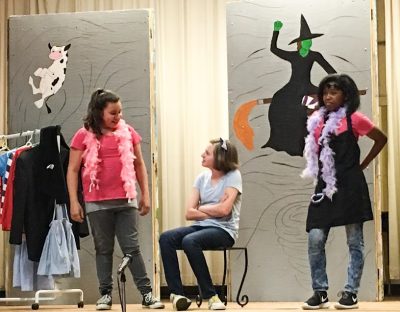 The next play put on by the young thespians was called “10 Ways to Survive the Zombie Apocalypse,” which received rave reviews. This was followed by another, the club’s most recent work, a dramedy entitled, “Oz.”

Mrs. Mundell and the club have greatly appreciated the helping hands offered by ICMS staff.
She notes that Mrs. Burgess “jumped in” when asked to co-sponsor the club. Mrs. Batista created promotional flyers, and ICES Counselor Marsha Hart volunteered often, assisting whenever and wherever needed. Moreover, parents donated time and, as Mrs. Mundell emphasizes, “more importantly, pizza,” to the cause.

Mrs. Mundell notes that “this school year is bittersweet, as some of our longtime members will be heading to high school next year. While I am sad to see the original crew move on, I’m also very proud of them. I feel lucky to have been a positive part of their middle school days, which we all know can be a rough time. The club has brought them joy, which has been infectious to those around them.”

The Drama Club has clearly evolved since its early days. “It’s so much better,” says Mrs. Mundell. “Unfortunately I can’t take credit for this, as the kids are the heart and soul of the gig!” She continues, “Not only have we come to understand how to logistically put on a production, but they have grown through hard work and collaboration.” She calls the result of all the students’ hard work and dedication a “big impact.” Judging from comments from some of the club members, a big impact indeed:

“Drama club has been a fun way to connect with people from other grades. We have just as much fun putting on the plays as everyone else has watching them. We’re all just like one big family.” — Jasmyn Benjamin, 8th grade

“Through Drama Club, I’ve made a lot of friends and learned to step outside of the box and take on different personalities for different roles.” — Erikka Moore

“Drama Club has been a way to boost my confidence. Rehearsing my lines in front of a lot of people helps me with public speaking. It’s also a way to branch out and talk to new people.” — Jordan Clark, 8th grade

“Drama Club is an interactive way to show teamwork and leadership skills through doing something we love. It boosts confidence while improving responsibility and involvement. I love Drama Club!” — Erin Haberman, 8th grade

“I joined Drama Club to make friends and get over my nervousness. I feel like I have definitely met that goal.” — Harrison Pryor, 6th grade

“I have been an active member of the drama club for three years now, and it has truly been an unforgettable experience. It has helped me through trying times when I thought I was alone. I realized I had other people counting on me who cared.” — Sam Welch, 8th grade