The Irvington Preparatory Academy Boys Soccer Team had a stellar season – in fact, its best ever. The Ravens finished with a record of 11-6-1. Head Coach Garrett Uhlman has commemorated this achievement by adding a second Ravens Soccer Program tattoo to his “collection.” 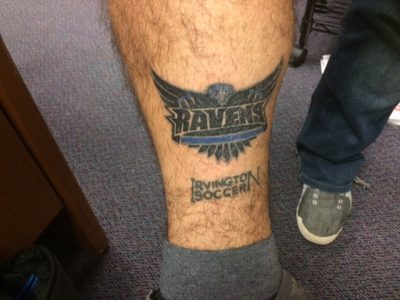 “In 2013, Assistant Coach Mike Wilson and I were at a restaurant and I suggested that we might be able to win five games that year,” recalls Coach Uhlman. “He said, jokingly, that if we win five games, he would get a tattoo. So I told the players that if we accomplished that goal, then both of us would get a tattoo. Coach Wilson just shook his head. We ended up winning not five but seven games, so I went ahead and got a tattoo.”

An important consideration in fulfilling this promise: Coach Uhlman’s wife, Tracy, who teaches 2nd grade at Irvington Community Elementary School, was all in. So he unveiled the first tattoo during the Howe game that year. This year, he put a similar offer on the table – if they would win 10 games.

Says Coach Uhlman, “Tattoos were never a problem for me. I always wanted to get one, but I think it’s important that they mean something.” These two do.

The second tattoo was revealed to the team during IPA’s first Indiana High School Athletic Association Sectional game in 2017, with Providence Cristo Rey. Coach was running late due to his overly long appointment…at a local tattoo parlor. At halftime, he told his players: “If I can spend two hours of pain to get this tattoo, you can give me 40 minutes to get a win.” And that they did.

The season ended with a valiantly fought 3-1 loss to Scecina Memorial High School, which was ranked third in the state. After falling behind early 2-0, the Ravens played solid soccer. This indicated that after eight years of determined program building by Coach Uhlman, assisted by Coach Wilson, the Ravens had arrived. Worth noting, the Ravens were ranked higher in every category than Scecina – including points scored, assists, and goals allowed – than their esteemed opponent. The Ravens Soccer Program had arrived.

Reflecting on the recently concluded season, Coach Uhlman says, “My favorite part of the whole experience this year is that every soccer player had an Irvington Community Schools connection, either as a freshman having come from our middle school or had been with IPA for more than a year: all 23 players. It was a pure Irvington team, and a truly an amazing season.”

One that is way more than skin deep for Coach Uhlman.