It’s not every day that an IPA alum walks in the front door and heads for a classroom to begin teaching. But today was one of those rare days. 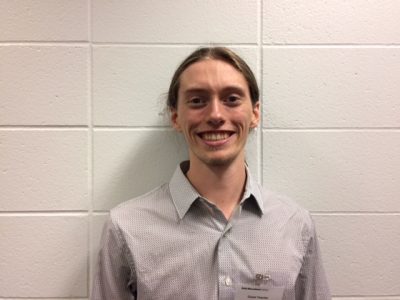 Will Smith, IPA graduate, Class of 2013, now works for Kelly Educational Staffing as he searches for work in the field of meteorology, which is the natural sciences degree he earned at Purdue University this year. Although Will would like to get a job as a weather forecaster, he notes that the job market is tight. So he’s looking into environmental science opportunities, both locally and nationally. Meanwhile, he thought he would try his hand at teaching.

So what was his day like at the front of the classroom? “It went really well,” he reported – and which IPA Science teacher Carl Fisher, whom he subbed for, will appreciate. “The kids were very well behaved, they were friendly, and they were polite.” He did not reveal that he was an IPA graduate to his students. Demonstrating an impressive sense of teaching professionalism, he said, “The main thing is, I made sure they took their tests and quizzes.”

His experience at IPA today might be the seed of a new career. Says Will, “I have thought about entering teaching. I love talking about science, the weather specifically. I think it would be really cool to teach kids about the natural sciences and encourage them to learn more about their world.”

He enjoyed his time at IPA, noting the strong instruction he received in Mathematics. He also worked hard in his IPA Speech class, knowing this would be a much-used skill in college. He adds, “There are quite a few things I learned at IPA that helped me to effectively transition to college.”

Will began his student days at Irvington Community School way back when in 5th grade. Today was a special for him, being his first teaching stint at his high school alma mater as well as his 23rd birthday. In concluding his interview, he wanted to be sure to offer a piece of advice to current IPA students based on his own undergraduate experience: “No matter how hard things got for me or how hard some of the assignments were, I never gave up. I stayed resilient and pushed through to get my degree and where I am today.”

We couldn’t have said it any better.